Well, once again its been too long without an update so here goes;

Finished the queen rearing course mentioned in the last update – having learnt various facets of queen rearing and general beekeeping
I’ve finally taken a serious amount of honey – approx 300lbs so far with more to come. Saying that I found today that from 2 x 30lb buckets I got 81 1lb jars, so it might be conservative. Hooray !
I have bought some labels for honey jars, finally, I just chose a temporary one for now. Then found some online software for creating labels myself at home, as our club secretary does. I made this 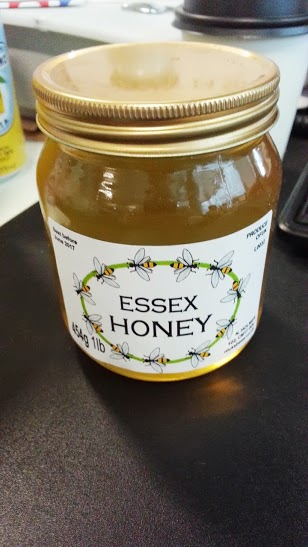 I went to the Thorne’s centenary in wragby, lincolnshire. It was very interesting, I got some good deals and learnt a neat idea from artisan honey, put honey cappings in a hive top feeder and give the bees full access and they will clear the cappings of honey, so effortless separation and the honey goes in the super again.

I also got a number of bits and bobs to make things out of which with a bit of luck will feature here. I have some plastic excluders that I am going to make a wooden run for so they have bee space (I am bottom bee space) and extra stiffness. I also got an electric nail / staple gun, so I should make quick work of that. I got some varroa mesh, from which I plan to make queen cages, mesh floors, clearer boards and other contraptions.

I worked the apiary on the borage, including one hive that went a bit mean. I found the queen and was on the verge of ‘dealing with her’, I chickened out and had a word with her, because she’d been good up til then. It seems to be getting better now, stopped pinging off the veil. She was also saved by having produced the most honey this year of any of the hives, with 5 supers taken already and 4 still on but not quite filled.

I acquired some decent strain queens in nucs and mini nucs. Two from Clive de Bruyn, some from Terry Thrussell (although I dont think any of them made it:- ( ) and some from other sources (I should keep better records)

I need to get on an put some pollen cages on hives so I can collect pollen before its too late, to make pollen patties over winter.
I have a lovely queen that I want to try breeding from, she hasn’t swarmed, she is very calm natured and produced a fair load of honey (by comparison). I am not sure if I have missed the opportunity though in terms of the right time of year.

I think that is all for now. I will have to get back to writing better posts with more pictures, I have lots of pictures, so I’ll just have a few historical posts when I get round to it.