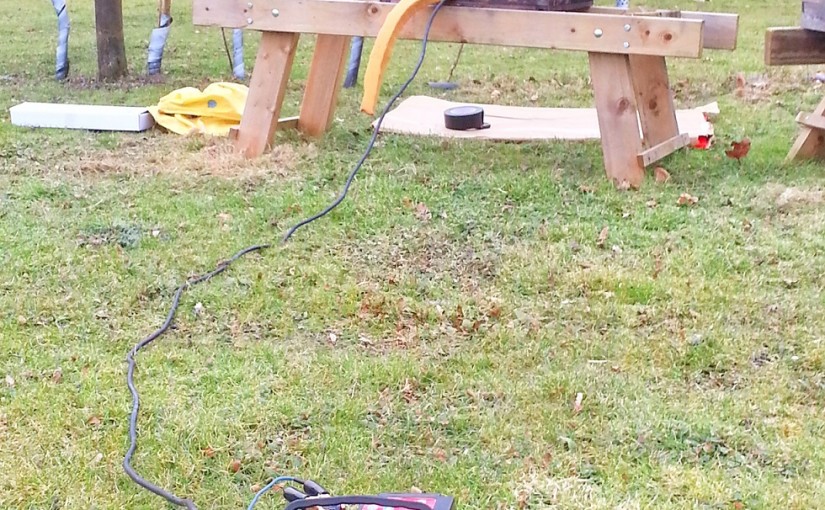 Late last year I did apply varroa treatment in the form of Apilife var as is my usual choice, erring on the natural side of ‘remedies’ with thymol (thyme oil). Earlier in the year I had tried predator mites, with unknown success  or otherwise given I could not get a mite drop from which to start measuring.

This year I’ve started with a slightly stronger tack, following methods discussed by LASI, using oxalic acid vapourised with heat into the hive. I’ve kept away from oxalic before, as while it is ‘relatively natural’, existing in rhubarb leaves for one, dribbling it over the brood has some rumors of being far from effective and more of being damaging to bee mouth parts; right at the time when they are in low numbers, they need to use their mouth parts with most urgency and also not being in a position to being readily replaced.

The process is relatively easily facilitated with a varrox vapouriser, the process being to put oxalic acid powder, put in the hive entrance, seal up the hive relatively well and then stand well back and connect the battery. The bees will be somewhat aggravated and will try to fan the vapour out so leaving open the varroa floor is a bad idea. The  vapour being a white misty gas can be seen after 20 seconds or so escaping from cracks and joints. DON’T BREATHE THE FUMES, they cause irreparable lung damage. A face mask and keeping up-wind of the hive is strongly suggested.

After two and a half minutes the oxalic will all of have been vapourised, disconnect the battery and wait a further 2 mins. On taking the vapouriser out be aware it will be hot – oh and watch out for upset bees when you are unblocking the hole.

Remember I said it was hot, well that means letting it cool before putting more oxalic in the heating dish – from personal experience – stop adding more and back away.

Oh and also when it is inserted be careful not no having it touching any handing wax or the whole hive could set on fire… One way to avoid this, and something you will likely have to do on a WBC (as they have floors that slope up to the frames) is to put an empty super under the brood to give enough height clearance.