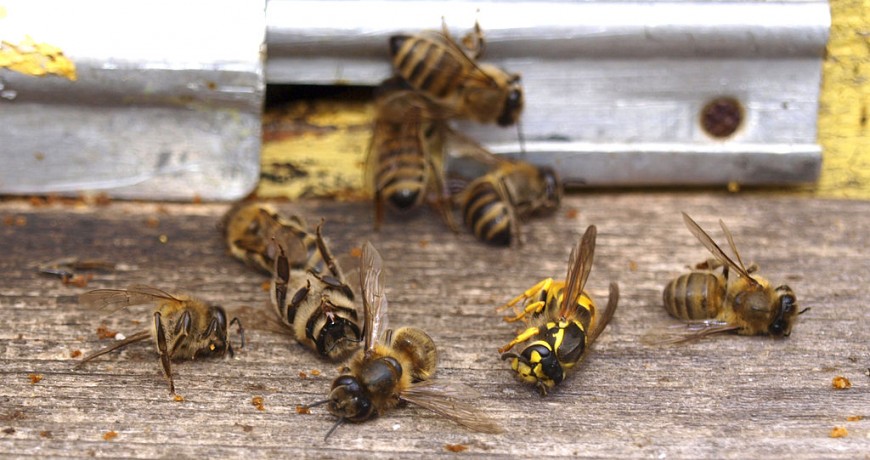 Wasps are a problem for bee hives this time of year, and for people in general. In all fairness it’s not the wasps fault, it is part of their brood cycle that causes them to starve and so they go about causing a nuisance of themselves.

Wasps can strip a hive in a week, they are after the honey, but along the way will kill all the bees or leave them so weak that they will likely not make it through the winter, so its something that needs to be dealt with one way or the other.

What to do about it?

Well the default advice that we get is to close down the entrance to one bee space. That’s about the space of sticking your little finger in. Don’t try this when sorting out the space, they don’t like being poked that much and if that’s all the space they have for getting in and out they may ‘take exception’ to you in the classic manner of upset bees. The model by which this works is that it allows the hive to be defended by having a small entrance the enemy have to funnel through – for example not his this works see the Battle of Thermopylae or the film of that 300.

There are a number of permutations on this model where you make either single bee routes in and out the hive or make them run the gauntlet while allowing bees to sting them as they try to enter via a channel of mesh or similar.

If your hive has already bee battered by wasps though there may not be much of a resistance force left so you could try an anti-robbing screen as shown on ‘Phil Craft Hive Craft’ or on Linda’s bees. The idea of this is to fool the wasps (also works if you have bees robbing the hive) into trying to get in a mesh covered entrance while the colony’s bees go in and out of a sneaky side entrance.

Talking of mesh, if a wasp makes it inside it is said they will feed their friends through a mesh floor. Obviously not as bad as a full on attack, but it might be an idea to take a look and think about closing the floor up. HOWEVER, given you are closing the entrance to one bee space, and its the hottest time of the year you may end up cooking your bees and blocking the entrance as they try to remove the dead dooming the whole hive; so blocking that up may be a death sentence. An extra layer of mesh below the screen floor about a cm (3/8inch) or more should prevent them ‘fencing’ their stolen goods.

Wasp traps work somwhat, you will need a few, wasps come in quite a number. You can get commercial models, I would recommend Wasp bane – not cheap but does the job well. Or you can make your own trap very simply. It is said that you should keep the traps to the edge of the apiary, for fear they attract the wasps to your hives. Personally I keep me by the hives as I think they will smell the hives first and the traps second. Don’t use honey in the traps or it will end up full of bees. Although inverted sugar syrup, the type you feed your bees in autumn works very well and I have not seen bees in the traps.

If anyone else has any ideas about how to deal with wasp attack, I’d love to hear about it in the comments below…