It was May 1st; I never seem to get round to writing these things up when they happen. The weather had been very unusual, we’d  had a warm winter, right through to early Feb and then cold and miserable right through to mid-April. As a consequence the bees had not balled over winter and I’d left feed on. I’d sublimated oxalic to deal with varroa, but due to the warm weather I would not expect them to be broodless which is required for that to work optimally. A week or so before I’d been and looked through the bees, done some of a spring clean,  but the weather didn’t hold for a full job.

The first hive I went into, I found the queen right away, she was walking around on top of the frames as I lifted the crown board; and she was alone. This had been a good hive last year and had gone into winter full of stores and as I said still had feed on top. Further to this I’d  also put on a pollen patty a few weeks back and when I did the ‘spring clean’ I’d noted they only had a couple of frames of brood so I had topped in up from a neighbour with an extra frame of  capped brood to boost the numbers into spring. On further inspection, they had basically ignored the doughnut feeder full of syrup, they had gone through much of the pollen patty and then starved due to hard stores of ivy honey. This had happened last year; with a mild winter they had eaten all the syrup given to get them through the winter and replaced it with  ivy honey. The plan was to leave syrup on top so they could use that. Unfortunately it seemed they did not get the memo. In short the hive was beyond rescue, even though the queen was still alive.

The second hive was a bit short of frames of brood for the time of year, but then most were, and this one had supported hive one earlier, so 4 frames of brood was as expected.

The third hive had been  my favourite hive, productive, very calm and not swarmy. Unfortunately the wasps had robbed it to death late in the season and it has stood empty since, stone on top signifying it was empty.

Forth hive, basically had lost its queen, when I looked in before there was a sealed queen cell, but this time no sign of it and only drones being laid.

Fifth hive – packed !! The few weeks previous I had noted they were on 7 frames and so I’d put a super on. They had since put a bit of honey in the super, but  it was by no means full. The brood was almost wall to wall though in the brood box, 10 frames. Looking through they had made a load of swarm cells – and I mean a LOAD, going through the hive about 16. Time to do something about it first job “Find the queen. All the way through, more swarm cells, no queen. Through again, no queen, cut down on queen cells, but not all of them. No queen in sight I thought I would follow a couple of manipulations. First frame with eggs and early larvae to hive four as a test frame, three more frames complete with a nice queen cell to the empty hive three to split, to reduce the colony pressure on five nd have a new hive three, feeder on top to support that. I then went back through, but still no queen to be seen. Another super on top then time to go.

Just as I was leaving, stepping through the gap in the hedge I noted a nice swarm about a foot off the floor – so  that is where the queen went !. Well I didnt have my swarm catching box or anything, so, solution, back to hive one, knock any remaining bees out, carry hive to the swarm, place under the swarm, quick shake of the branch, flump, bees in the box; hive back to the stand, feeder on, roof on, job done !

All in all not a bad day, starting with 2 working hives, ending up with 4, maybe 5, if the test frame takes. 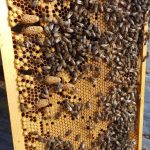 Too many swarm cells 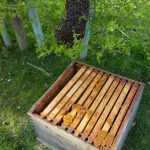 Swarm – get in the box