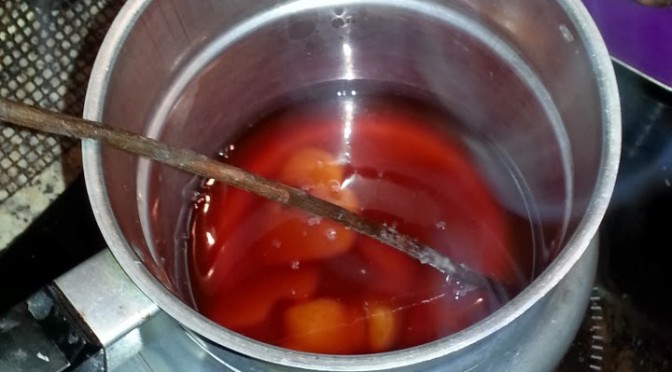 I have this 1lb block of bees wax (or is that beeswax?) and it is pink / red tinged with propolis so I decided not to use it for lip balm like last time.

Now last year, on a whim I bought a couple of boxes of wax tins with the theory of making some polish. I figured to make some polish at some point, seemed like another nice side hobby / feature of  beekeeping. There are so many : woodwork, food handling, advertising and selling honey, etc

The thing that held me back was trying to find turpentine which I read was the other ingredient. Everywhere I looked it was turpentine substitute. Finally I found the real thing and it wasn’t cheap, about £8 per 500ml bottle, no wonder they have turpentine substitute, it is only about £1.50 for that much.

With the red wax that I didn’t have another clear use for I decided it was time to bite the bullet, so I bought the turpentine.

Today when I finally decided to get to doing it I looked on the internet for ratios and to check ingredients. At this point I found LOTS of recipes, lots of different recipes with very little in common.  Turpentine, beeswax, carnauba wax, olive oil, essential oils, soap flakes, water, linseed oil, other non-turpentine solvents (arghh !).

Various recipes here and a no solvent recipe with olive oil

In the end I decided to make two batches, each with a different recipe and see how it would turn out.

Then I decided to cut it with linseed oil to make it go further (based on a recipe, not just to make it less expensive), not to mention that I already had some of this to hand; I have bought bottle after bottle for treating the outside of wooden hiveparts to protect them from the weather.

I would have liked to use…

…but I didn’t have enough olive oil in the house. I also thought about using essential oils, but I figured that might not work for the usual carpentry buff who might buy it, and I would need to use a fair bit to get over the smell of the turpentine (phew!).

I melted the bees wax in the bain-marie (not to hot or it will degrade). A bain-marie is just one saucepan that fits inside another saucepan with boiling water in. So the inner pan can never get warmer than 100C (212F), because the water boils off. Then I added the turpentine and mixed it in. On the second recipe I further added the linseed oil, which incidentally made for a much better looking product.

I made myself a paper funnel to help pour the hot polish into the tins. Note for those who might try this, if you do so, bind it with selotape, like I did the second time. The first time I held the cone in shape with my hand, hot turpentine and wax soak into the paper a bit and paper is not the best insulator in the first place. Only a bit Ouch! And I only missed a bit, cough… well the chopping board looked like it needed a polish anyway 🙂

On the first batch I just poured the polish in and filled the tins, by eye, to what I felt was a sensible level. On weighing this later it was fairly consistent in weight, but not the 100g they are supposed to weigh.

On the second recipe / attempt I thought I should try to get them to be the right weight and so carefully weighed them on the electric scales. Getting all 100g in was not that easy, it was right up to the lip of the tin. But I managed it

Good plan doing it on the scales and getting it right to the lip with exactly 100g of polish in, right?

Wrong ! Filling hot molten polish into tins, obviously in hindsight, makes the metal tin expand. What happens when the metal cools and contracts? That’s right, less space for the polish and so it overflows… Darn ! This photo was actually one that overflowed not very much, but I forgot to take a photo earlier on the one that went across the counter and headed for the cupboard. Luckily you can just scrape it up with a knife and re-melt it again.

In the end the linseed version came out a better colour. I can’t speak to how wel it will work as a polish, not having experience in using beeswax polish before as a comparison, but its made a nice sheen on the chopping board 🙂