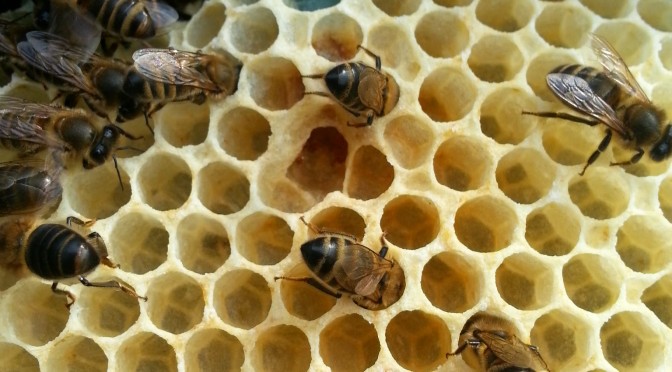 So the dark patch / hole between the two bees with their bums in the air is a hatch, where a queen has cut her way out and emerged from her cell. This means she is out and roaming the hive, still a virgin until she is mature enough to go on mating flights (about 4 days from hatch – Saturday), and we have the weather and the drones (cross fingers).

I wasn’t so lucky with the two mating hives, they both failed. On opening them the queens were not being cared for and only about 20% of the bees that I had put in were left in the hive. Lessons – follow instructions about stocking mini-nucs, or at least move them to another apiary so the flying bees don’t just go to the hive they started in. I also suspect that putting the queen cells in the metal cages might have dissuaded the bees from looking after them due to being cold metal – next time have comb to press the cell into.

Still, I have a hatch from my own first grafting, one way or the other its a win. Even if the queen does not make it to mated, I’ve kept the colony from turning to laying workers (or just being bored).

I’m going to leave them to a week on Saturday (12th April) so she has had time to become mature and hopefully had a weather window to get out and mated; maybe by then I will get to see eggs, fingers crossed.